Built in 1937, this deteriorated powerhouse was a fascinating place to explore freely and without time constraints. Once known for housing Finland's very first gas turbine, this station generated its final watts of electricity in the mid-nineties and has been completely unmanned and unheated for a decade. In that time, wildly varying temperature, dripping moisture and condensation can devastate concrete structures and make streaks of rust run down walls, paint crack and chip, fall down like snow. Thermal expansion makes plaster brittle and it comes down in chunks. Anyone in their right mind wouldn't go in, even wearing a hard hat and air filtration. Especially not to spend hours on end inside every time in the dead of night.

To me, Power Station 17 doesn't exist in daytime, it's only known at dark. Seeing it in during the day and walking inside with sunlight flooding though windows might be demystifying. It may take away some of the danger, part real, part imaginary. Mind starts playing tricks on you within closed doors after midnight, staring down on a dark pit of darkness and lighting a narrow slice of it at a time by your flash light. There is real danger in that space. Rusty scaffolding may bend and give up, make you disappear in the darkness below. Something might fall down on you and kill you. A creature unknown by science and reason may appear from the bowls of the rusty machinery and bite your entire arm off. You keep hearing these noises that repeat on random intervals that do not sound entirely mechanical. They honestly sound more like someone - or some thing - banging on something either desperately trying to get in or to get out somewhere high above. It took several nightly visits till I got used to this place's ambient atmosphere enough to go about my work unconstrained and I'm not at all new to urban exploration and abandoned places.

This was one of those projects that just really got out of hand in terms of how big of a production it bloated into. At first, my intention was just to visit the place maybe once, gather some nice shots around the area, take a quick look inside. But it just got larger and larger, when I started seeing huge potential inside. I rarely find  places untainted by vandalism like this, and it was a great opportunity to capture something that had just one day stopped, assumably on short notice, 16 years ago. There were personal items in the locker room, office table still had an unopened shipment that was marked containing lab equipment. No one even bothered to clean it up, it was just all left to rot and rot it did.

Obviously I didn't set out to go out there and shoot this place in purely objective documentary style, trying to capture everything in natural light and without including my own style into it. These images are colored by my experiences inside the facility, the anxiety caused by this decaying dark void of space. 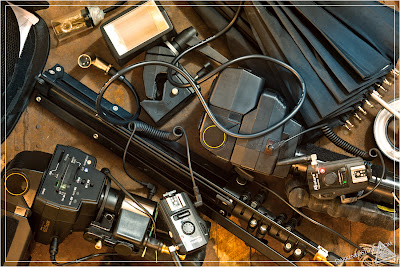 
Lighting gear used inside Power Station 17 will be covered in detail in my later posts. I should write about my modified Sunpaks and its heads and powerful Metz flashes, tilt photography, fast lenses, radio triggers, various lightstands and gripping gear. Say little something about how wonderfully versatile velcro is and how gaffer's tape has over 1000 and one uses and for instance how a regular white plastic bag can create smoke. Stay tuned if any of this sounds remotely interesting.

Shooting timelapse footage was a massive undertaking on its own. I ended up with about 90 gigabytes of material and it was edited in 3840 x 2160 double fullHD resolution for future applications in mind. Although the video is mostly a teaser for the photo album, it also stands pretty well on it's own.


I'm planning to do more timelapse videos for youtube later on. Right now I'm sorting my options for motion control and trying to come up with reliable, affordable and practical alternatives for dolly tracks and panning motion control heads. None of the commercial products seem that finalized and I'm sure that with enough of ingenuity and planning, I'm able to figure out something more versatile with fraction of the cost. I'll end this post with this b-roll of footage, that was originally for my main video, but that was till I got a lot more ambitious about my video coverage.

This blog's about geeky professional photography, video and lighting tricks. It's about hard core customisation and making your gear fit your needs exactly, not wasting a gram carrying things you dont really need. Occationally it's about specific gigs and projects, video and motion control timelapse photography. It talks a bit about dealing with one's own creative side, finding your style and finding the right way to approach a new venture.